Following the multiform consultation on the Rockland Special Planning Program (PPU), which was extended a few times to gather feedback from as many residents as possible, the Town of Mount Royal plans to present its results live online on March 16. 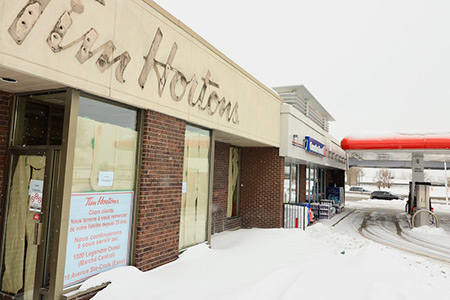 In the center of the Rockland district, this commercial island regrouping a gas station, a dépanneur and a Tim Horton, now closed. PHOTO STATION MONT-ROYAL ARCHIVES

Residents showed a keen interest in the issues raised by the proposed development vision, as evidenced by the 160 written submissions sent to the Town Clerk. These contributions are a supplement to the questions and comments received during the Town’s chat consultation held on November 5 that attracted 575 unique participants.

“The contribution of residents to help develop a new vision for the Rockland area is invaluable. We thank everyone who took the time to participate in our consultation,” said Mayor Philippe Roy. “Raising concerns such as those of close neighbours of a planned development site is integral to the urban planning process. While some concerns seem to be based on misunderstanding, particularly regarding the perceived intention to reduce greenery in the area instead of increasing it, many of the points raised by residents gave us real food for thought. Concerns about traffic and building heights are prime examples.”

The Rockland sector PPU is structured around six main objectives: increasing green space in the sector, ensuring the site’s commercial sustainability, improving traffic flow, better integration of public transit and active transport, eliminating heat islands, and creating favourable conditions for the installation of a residence for retirees and seniors. The PPU’s purpose is to oversee any future transformation of the sector.

“We must try to imagine what the Rockland sector will become in the long term, 15 or 20 years from now, bearing in mind that traditional shopping centres are already being encouraged to rethink their business models,” the Mayor added. “We believe that residents will benefit from the Town’s proactive and collaborative approach to planning this area’s future. With their help, the initial vision proposed can only be improved. We will consider any insightful ideas shared with us.”

For the sake of transparency, residents’ submissions on the Rockland PPU sent to the Town Clerk will be available on the Town’s website in the Major projects section, accessible from the home page, prior to the public presentation in

March. The Town Council also intends to commission a private firm to continue studying traffic in the Rockland sector by conducting a more in-depth analysis. This is a complex file, one the Town has already stated that it wishes to take its time on.