Following the popular vote with over 750 participating residents, Station Square will be the new name for the public space under construction above the railway line between the Laird and Cornwall bridges. This submission won with 51% of the vote. In the Town’s fall 2020 contest, six residents submitted this suggestion and each won $250 to spend in local Mount Royal businesses, as per the contest rules. The Town Council would like to thank all participants and extend a heartfelt congratulations to Nadim Abou-Chacra, Louise Baillargeon, Yves Beaucage, Claudie Vigneault, Tarik Kadiri and Tony Terenzi on their victory. 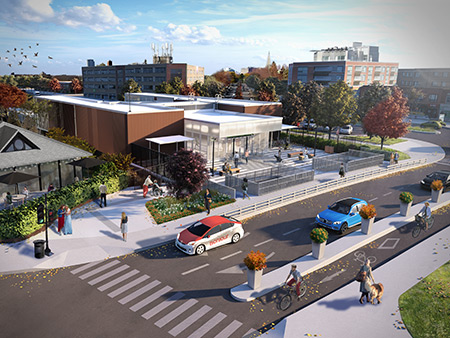 “We are thrilled with the result,” says Mayor Philippe Roy. “From all the selected proposals, Townies chose one honouring our local history. It couldn’t be a more fitting and charming name.”

Born of a railway initiative over a century ago, Mount Royal will develop its new public space a stone’s throw away from its historic railway station—now home to restaurant La Pizzaïolle—and near the new Réseau express métropolitain (REM) station, Ville-de-Mont-Royal.

REM construction of the platform supporting the new space is expected to be completed in December 2021. As early as summer, residents may be asked to provide feedback on the development of this additional public space so Station Square can be inaugurated in spring of 2022.

“We plan to conduct a consultation on development of the new public space to ensure there is consensus among the entire population. This will be a large, central space, extending over the railway trench and finally uniting the east and west halves of our garden city,” adds the mayor.